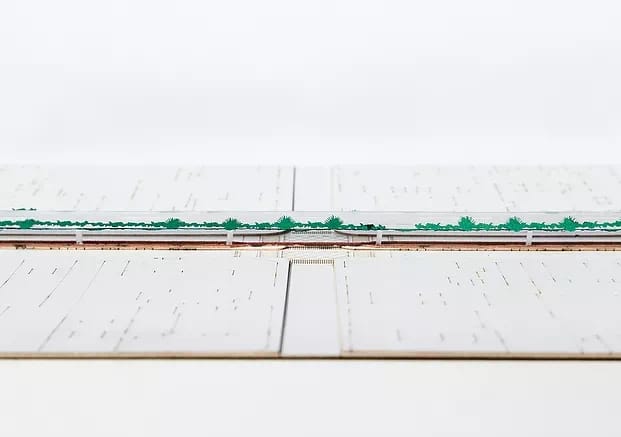 The Minhocão marquise was built in 1971 as a symbol of modernity that gave the car a central place. Today, it is a scar in the center of the city of São Paulo.

The master plan has a maximum of 16 years to transform this elevation of almost 3km. For years we have been wondering about the future of the road but never of its lower part, totally forgotten in this reflection, yet the most reached, which forms a kind of urban tunnel, a source of abandoned shade.

Triptych in partnership with the landscape gardener Guil Blanche, have changed their point of view on this infrastructure, to move from the suspended road to the Marquise. Triptych and Guil Blanche have donated this conceptual work to the São Paulo City Council. They invite the Mayor and the inhabitants to see the Marquise of Minhocão as a productive space and not only a subspace. This concept was given to the São Paulo City Council.

The project is first of all participatory. The first step in this reflection was to invite the local community to develop and share their desires for the future of the Marquise du Minhocão. The structure of Minhocão will change but in keeping with the identity of the neighborhood and the local community.

Then, Triptyque want to give life to the place by giving it light through a simple operation of opening between the viaduct tracks, to create beams of natural light. Light activates the place and allows life to take place, first in the form of plants. The Marquise du Minhocão is the most polluted place in São Paulo. According to the research, plants suspended from the ceiling all along the Minhocão, will filter 20% of the CO2 emission of cars. The irrigation of these plants will be ensured by a system of water collection, the vaporization will have a role of cleaning of the air and cleaning of the surfaces of the Marquise.

Finally, the Marquise will be able to receive mixed programs. Its length will be divided into islands determined by the space between each pillar (33m), these islands will be numbered as the “posts” of the long beaches of Rio de Janeiro. Each island will receive 4 program modules: culture, food, services and businesses.